A downloadable episode for Windows

Welcome to the multiverse's #1 dating site! Where you can meet the monster, human, alien, robot, demon, elf,  or other sexy single sapient being of your dreams!

The Little Black Bestiary is an episodic dating sim, with each episode being a story about a human who joins an unusual specialty dating site and romances a 'monster' (Or other different kind of non-human fantasy race.) Most episodes (this one included) contain NSFW content and are not suitable for players under the age of 18.

This is our 'pilot episode,' so to speak, in which the player goes on a date with Isabel, a dragon-girl with a small otaku streak. Can romance bloom in the local comic shop?

This episode is now officially out of beta with it's 1.0 release!
The next episode is already in development, be sure to check the devblog for details.

For early access to test builds and a say in the kind of content we produce for our future episodes, please consider joining our Patreon! The game's free though so it's basically just a tip jar to potentially fund some extra content.

We're currently holding a public vote for the character design of the 2nd episode's date. You can cast your votes here: https://www.patreon.com/posts/episode-2-design-19818208 The vote is open to the public and although a Patreon account is required, you do not need to be a patron or contribute any money to vote. 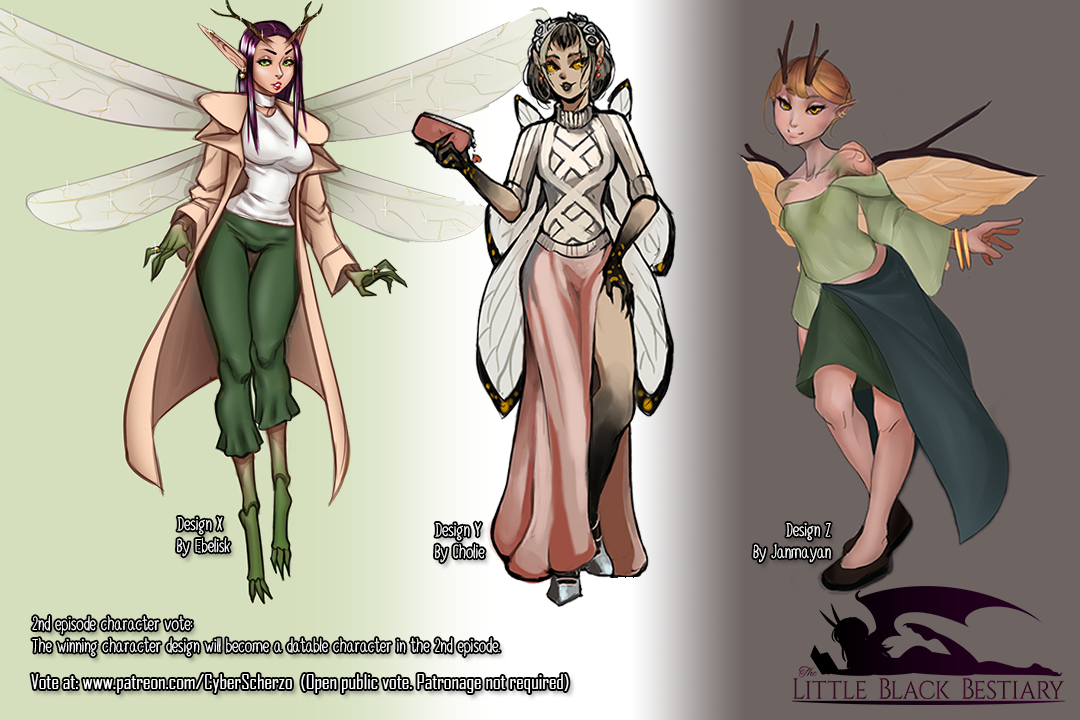 Ok, so I usually do all my reviews as I play through the story and go along with how I feel from there but I have to be honest and say that even though it was a quick story, I couldn't close out of the window until it was finished, which is a rather hard feat for many game/VN creators to do to me.

Anyways, I don't think I need to say much, but I will... The world you have built here, although not built up nearly as much as it could've been, already has me captivated and ready for more storie from you and your team (if you have a team that is). The scenery is very beautifully drawn and has a great amount of attention to detail, which is something that you don't see out of too many Visual Novels and even Triple A games out there on the market.

The musical arrangements in this VN deserve a section dedicated to themselves alone. Every piece of music just fits in with each setting, ranging from the oriental style theme of the Sushi Resturant, to the upbeat theme for the Comic Store. The tempos are matched very nicely by each nstrument that accompanies the scene, and the person who put the music together for this game has a lot of potential that I hope to see come out in your future titles.

One thing that my girlfriend and I love about VNs is the fact that imaginary characters can be brought to life and given a sense of realism, just by dialogue alone, such as with Isabel and even the main protagonist. I see a great variety of creators with skills at making characters come to life such as NomNomNami, or NadiaNova, along with a small handfull of others, but no where have I seen the way that they immidiately become like some people that I could see myself hanging out with IRL.

Possibly one of the greatest things about this VN is the art style. I already talked a bit about the scenery, but the character art is so detailed when you get a chance to get up close to see the details. The art during the ~Sexytimes~ is so god-damn amazing and so detailed with certain parts of the backgroud blur bouncing off the sides of the charactersand how the semi-neon lighting of Isabel's tongue seems to actually glow... It  just blew me away...

One small complaint however, is that the dialogue doesn't move with every click. For example, I'd be done with a string of text and it'd take me 3-5 clicks to move on, while the next string would take only one. I's just a bit inconsistent is all.

Of all the VNs that I've encountered, this one may be my all-time favorite

P.S. I would absolutely love to fund your Patreon, but sadly due to some personal matters, that cannot happen. So just know  (even though this doesn't really help) that you have my full support for your future projects

I like the small edition of the little voice sample for the text. It's such a small thing, but it somehow gives a bit more voice to the characters, which is neat.

I would really like to see how the realationship between the MC and Izze progresses after the first date.

Found this on Newgrounds and thought I'd show some support here. The writing is amazing, the art is beautiful, the sex scene was enthralling, and I legitimately loved every part of the experience that was playing this game! Keep up the amazing work!

I really like all of this game. The art is nice, the history is really interesting (maybe the worst part is the duration)  and the dragon girl is so cute.

I need ask this, have any plans to expand the history between the dragon girl and the MC? or its only one chapter for girl? Because i want see more of him T_T

Great game, I would really like to know where I could find the music.

Sorry for the late reply, but I literally, just now made a bandcamp account! You're pretty much the first one to know.
This game contains 3 original pieces of music that were made specifically for it. They are now available as a mini-soundtrack on said brand new bandcamp account here: https://cyberscherzo.bandcamp.com/album/pretty-otaku-thunder-dragon

You'd know them as the Title Screen music; Isabel's Apartment music, and the Sex Scene music.
The rest of the tracks are from various royalty free music libraries; thier composers are all listed in the credits and readme, but if there is a specific track you wanted to find I can point you to it. Some of them have specific ToS rules that prevent me from reposting the track or direct linking to the file; but the websites for most of the other music sources are:
http://d-symphony.com (Sushi Restaurant BGM)
https://maoudamashii.jokersounds.com (Comic Shop BGM)
http://www.tam-music.com/ (The Music when you first meet Isabel)
https://incompetech.com/music/royalty-free/music.html (The intro text chat)
http://www.rpgmakerweb.com/a/visualnovelmaker-music-sound/modern-day-music-mega-... (the 'city' BGM: Side note I have a version of this that allows non RPG maker use)

I had no idea what this site was until I played TLBB, and only decided to make an account to show my appreciation to the dev team for making such a great game. This title is really nice in my opinion,  both the artwork and the story so far were entertaining and kept my attention. My only "issue" is that I'd like the episodes to be  a bit longer... though that's likely only because I could play a game solely designed around Izzie and getting to know her better and hey more h-scenes wouldn't be ignored either ;) Keep up the good work you guys, and thanks for an awesome game. <3 Izzie

Are all the datable characters going to be female or will there be some male or NB too?

The short answer to your question is: "maybe."

The option is on the table. You've likely noticed I've avoided calling it a "monster girl" game and just calling it a "monster" game because that's something under consideration. The plan is to decide which characters will be dates, and in which order, via popularity votes.  I can say for sure that some characters in both those categories will get added to the character polls at some point, but they may or may not win the votes.

There are 100% going to be male monsters and NB characters as NPCs and side characters even if they don't win the votes for becoming dateable.

Likewise, the option to be female or NB is also on the table, but it's both cost and labor-intensive to have gender options on every chapter, (Requires alternate CGs on several scenes) so to what extent we prioritize those options will also be based on popularity polls.  That said, playing as a female and dating a monster boy; or dating an androgynous, genderless, or hermaphroditic monster/alien/robot; or having f/f, m/m whatever/whatever pairings are all scenarios I can see cropping up in the future.

Including  those options might alienate some fans who would prefer we focus only on monster-girls; but there are plenty of other monster girl games that do so, so I'm personally interested in finding out how much interest there would be for expanding on the range of available content.

I would be interested in both playing as and dating female/NB characters (I get that the playing as can be more of an issue, but even if it's not reflected in CGs but only as a pronoun choice that would be OK for me).  I'm just not interested in romance games that are either BxG or GxG exclusively.  For these kind of games, I mostly play otome (GxB) but I do occasionally play BL/yaoi (BxB).  Totally understand that that might not be this game (that's why I asked) and if it's not a direction you want to go in.

This is my situation as well. I'm glad someone already posed the question, because I was just about to ask!

Good Premise, game froze on me on the comic book store. But the girl is cute, I'll be waiting for more.

Thanks! I'll look into the freeze. Could you possibly elaborate on when exactly the freeze happened so I can pinpoint the possible cause and fix it? If it was near the beginning or end of the scene (or what specific line of dialog it occurred on if possible) if it was on clicking a specific object or pressing a certain button or etc.

I'm waiting for the continuation of the story.

I've really liked from this game so far. Looks really promising, specially for a xenophilic like me. :)

I wonder if you'll be able to date goblins, gnolls, nekomatas, najas, spectres, ghosts, "chubby" and "thick" non-humans and even skeletons (because why not, haha) in the future.

I also liked from how the character reacts accordingly to your answers, so being a pervert or a manipulative jerk will get you nowhere in this game, heh.

Anyway, keep up the good work, and have a nice weekend. ;)

Thanks for playing!
We're hoping to have a huge variety of available dates, both in races and bodytypes eventually. We have some concept art for some potential future dates we're going to be trickling out, though we're focusing efforts on getting this first episode done first; and a dragon seemed like a pretty good starting point.

Some options settings will be implemented in the next build. Unlockable gallery is also on the list.

Reply
The Jester Guy1 year ago

Thanks for your answer.

Oh, that's great to know, and I understand: this episode was fun, and I see how you're taking your time to make a good and enjoyable VN to play through. I respect this, and I'll be looking forward to the improvements. Again, keep up the good job.

Oh, nice. Thanks for taking note of my suggestions. Hope you have a nice week. :) 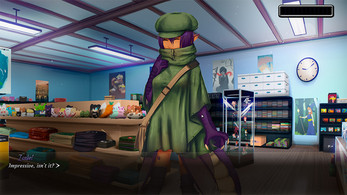 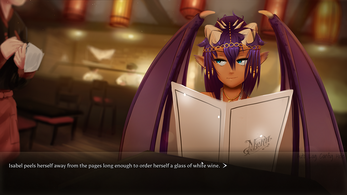